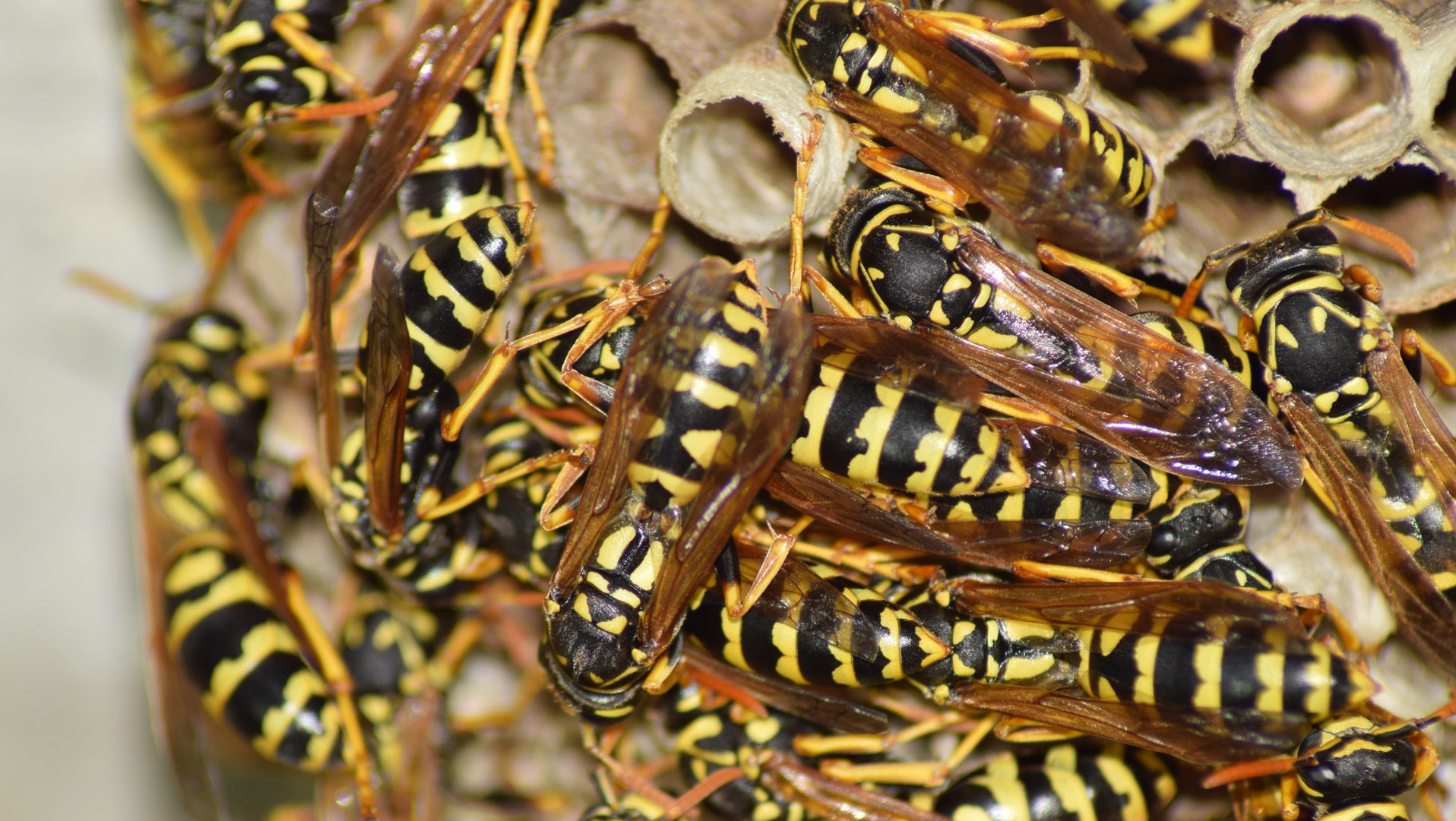 01 Feb Do Bees and Wasps Hibernate in the Winter?

Bees and wasps conjure up an image of a lazy summer day in Hilton Head, with muted buzzing in the background as they pass from flower to flower or swarm around their nests. But what happens during winter? Do bees and wasps follow their insect brethren and scurry for cover?

While many people use the terms “bee” and “wasp” interchangeably, there are a number of differences between the two. Our Hilton Head pest control experts explain the facts about bees and wasps, including where they spend the winter months.

As members of the Hymenoptera order of insects, bees and wasps are closely related. They share the abilities to fly and sting, and both are characterized by a narrow “waist” that forms the junction between thorax and abdomen.

Beyond that, the two insects have distinctly different features. Bees have rounded bodies covered with hair and flat rear legs. Since bees are pollinators, these characteristics serve them well as they carry and distribute pollen.

On the other hand, wasps, which include yellow jackets and hornets, have smooth, cylindrical bodies and legs. This makes their “waist” more pronounced and gives them a sleeker appearance.

Bees dine on pollen, a protein-rich powder, and nectar, a sweet water. Both substances are produced by flowers. Honey bees convert nectar to honey, while pollen is transformed into royal jelly when mixed with chemicals from the glands of worker bees. Appropriately, the queens alone feed on royal jelly.

Wasps are predators that dine on other insects, making them a valuable part of the ecosystem by providing natural insect population control. They are also attracted to the scent of human food, particularly fruit, sugary beverages and beer.

Although they will attack when threatened, bees are generally gentle. Honeybees die after stinging due to the trauma of losing their barbed stinger, which remains lodged in the target. Other varieties of bees can sting repeatedly.

Due to their predatory nature, wasps tend to be more aggressive and easily provoked. In contrast to a bee’s stinger, a wasp’s stinger is smooth and slips easily in/out of the target. When faced with danger, a wasp emits hormones that alert other members of the swarm, who rally to its defense.

Bees are highly social insects that live in nests or hives, which are man-made homes. A hive holds a honeycomb made of beeswax which forms a matrix of hexagonal cells.

Wasps can be social or solitary. Instead of producing wax, wasps use wood pulp to create a paper-like substance for building a nest. Solitary wasps create a home base out of mud that they can attach to any surface.

Where Do They Go in the Winter?

While bees and wasps are commonly thought of as living in hives and nests, some species reside underground. They may burrow into fresh earth, or take advantage of existing cracks and openings. The queen, who is responsible for reproduction, goes into hibernation during the winter, while drones and other colony members die off.

In contrast, honeybees remain active during the winter. As temperatures start to drop, the bees create a “winter cluster” by gathering in the center of the hive, and protecting the queen becomes their primary job.

If you discover a nest of bees or wasps on your home or property, removing it yourself is risky. Both wasps and bees, even the less aggressive ones, will interpret any action as a threat to the colony and attack.

Island Pest Control has been reliably serving home owners in Hilton Head and throughout coastal South Carolina for more than 35 years. Contact us for help with bees, wasps and other pest control problems.