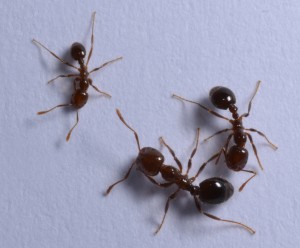 Throughout the world, ants are well-known as one of the most common insects, but few people realize that these tiny, seemingly harmless insects can actually be quite dangerous to people and buildings. Considered by to be a disgusting annoyance at most, ants of various types, including fire ants, can actually cause considerable harm in their bites and stings, and in some cases, they will cause damage to structures in order to construct their colonies.

While not all ant species will attempt to bite humans, those that do are a substantial danger. These bites can be extremely painful, and given that ants exist in large colonies, multiple bites can be excruciating and in extreme cases they may even require hospitalization. Bites can cause illness in some, along with breathing troubles and even anaphylactic shock in victims who are allergic. If you or someone else in your home or business experiences any of these symptoms or notices bite marks, you may have an infestation, and an ant exterminator should be contacted as soon as possible. This urgency increases if you think you may have a fire ant infestation.

Easily recognizable by their reddish-brown bodies, fire ants are much more dangerous than their common black ant kin. They can be found throughout the southern United States; South Carolina is no stranger to fire ants. Not only do these pests bite, but they have painful stings that can cause illness, vomiting, allergic reactions, even paralysis. Under no circumstances should an amateur attempt to take care of a fire ant infestation, it is extremely important that you hire a professional ant exterminator to resolve the problem.

Bites and stings aren’t the only threat that ants present. These insects are attracted to food, and once an ant scout locates a source, it will leave an invisible, undetectable pheromone trail that other ants will follow. Not only does this lead to lost or foodstuffs, but what the ants don’t eat will be contaminated. Ants are not sanitary insects, they can track through all manner of filth outdoors, underneath floorboards, and behind walls on their way to find what they want. What they step in can wind up on your food without you even knowing it, potentially spreading dangerous diseases.

Aside from causing illness, ants can also be quite dangerous to both homes and places of business. Carpenter ants do not eat wood like termites, but they do carve holes in order build buildings they’ve infested. Even the most benign varieties of ants can open up passages for other, more harmful kinds of insects to slip inside your home or business and wreak havoc, potentially leading to a much more dire and expensive infestation. Thus, ants can be seen as a gateway insect: making other insect infestations much more likely.

Even if large ant colonies are found outside, it is only a matter of time until they start to find their indoors: where the food is. Some home solutions can be effective for ant prevention, such as keeping food in sealed containers, regularly throwing out garbage, and wiping areas clean with soap and water where ants have been spotted, etc. However, once they’re in, getting them back out may not be as simple as using household chemicals and cleaning up. Our professional ant exterminators here at Island Pest Control know how to deal with even the worst ant infestations, and they’ll make sure that every ant on your property is killed. For preemptive care against them, purchasing our exterior treatment guarantees that no ants get inside your building for a full year, providing peace of mind and healthy living for your family or employees.

If you hire us and at the end of 30 days you aren’t 100% HAPPY, we’ll come back and retreat your home for FREE. And we’ll keep treating it for free until you tell us you’re happy. After 30 days, should you still not be satisfied, we’ll continue to provide service at no additional charge until you are satisfied, or we will refund your last regular service payment.

Have Bugs? Let Us help!