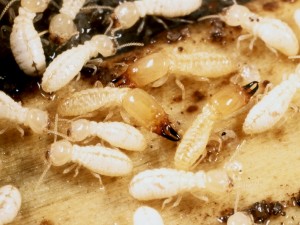 Unfortunately, there are many different types of termites and they vary from region to region, but the one that is a big pest here in the Lowcountry is the Formosan termite. While they prefer warm as well as very humid climates, the Formosan are mainly found in the southeast region of the U.S., but they have been known to be found as far north as the southern Canadian border.

Well, unlike native species of termites, the Formosan termite colony can grown to several million termites allowing them to cause more structural damage in a shorter time. The Formosan termite can utilize moisture better than native termite species. A damaged roof or leaky gutter can easily allow them to create what is known as a carton, where they can retain moisture within their colony above ground. This means they can create a colony inside the beams of your house in plaster, wood, and in rare cases, low-grade metal.

They are also extremely fast when causing damage. One Formosan colony can eat up to 300 feet per day. Now imagine that, but inside the structure of your home. Not a pretty picture.

The Formosan is also more defensive in protecting its colony than other termites. The soldier termites actually emit a white liquid used as a defense to help protect the rest of the colony.

Like all termites, the Formosan is split into three classes; the workers, the soldiers, and the reproductives (flying termite swarmers, kings and queens). It is easiest to identify the flying Formosan since they tend to swarm at night around bright lights such as lamp posts, porch lights, and even windows. Native species swarm during the day. These flying termites mate in the air and end up laying eggs in a moist area. A female Formosan queen can actually lay up to 1,000 per day once the colony is established!

Once the termites have grown and the colony is established, the workers will eat their way up through the wood cellulose fibers into your home. They are even known to attack non cellulose material like lead and copper. 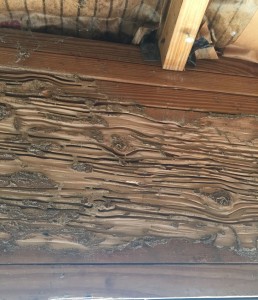 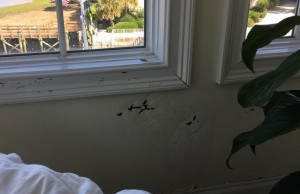 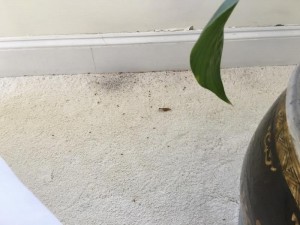 Early signs of a termite infestation are easily overlooked and dismissed as dirt or water damage. But a trained professional can quickly point out termite damage like what’s seen these photos.

As a homeowner, one way to spot damage is to see crack-like lines on your wall, foundation, beams, etc. Those are actually tunnels that the Formosan colony has eaten through. If you are seeing these lines contact your pest control company immediately.

Make sure that you have regular termite inspections. Prevention is the first step. Also, make sure that there is no wood to soil contact in, or around your home as that is the quickest way for termites to gain access to your foundation and cost you thousands in repair.

If you already have damage, the best thing to do is invest in a termite treatment. Here at Island Pest Control we offer the Sentricon Colony Elimination System which also protects the White House, the Statue of Liberty and even the Alamo from termites. Instead of spraying chemicals around your property that may be disrupted later on by yardwork, rain or simply breaking down over time, the Sentricon system actually eliminates the whole termite colonies! AND Sentricon has the research to prove it!

If you think you have termites on your property in Hilton Head, Beaufort, or Bluffton, South Carolina, ask about our FREE termite inspection today. We’ll come out to your property and inspect for termites, and let you know if you have something to be concerned about.

When you have a problem with termites or any other pest – or just a question about termites in general – call Island Pest Control today! We’ll be happy to speak to you anytime.