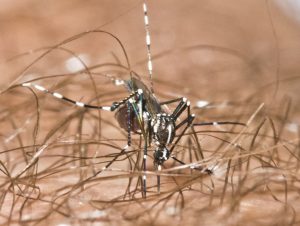 Mosquitoes are one of the most common pests in the Hilton Head area, which prompts many calls for SC pest control services among homeowners. One of the species found in the area, known as the Asian tiger mosquito, is an invasive species that has recently been associated with Zika.

The Zika virus has been in the news in recent months because it has the potential to cause serious birth defects when pregnant women are infected. Zika is normally spread by the Aedes aegypti species, but scientists recently found genetic pieces of the Zika virus in Asian tiger mosquitoes.

These mosquitoes came from eggs that were gathered in Brazil during a Zika outbreak in 2015. Although the results are not enough to prove that Asian tiger mosquitoes carry and spread the Zika virus, especially in other parts of the world, it does raise concern that this could end up happening here. More research is needed in order to determine the association between these pests and Zika.

This species hasn’t always been in the SC area. It first came to the U.S. in Texas back in 1985 and spread to 39 other states over the years. These mosquitoes are able to tolerate colder temperatures better than other species, which helps explain why they have become so widespread. Unlike other species, they are also known for coming out during the day and biting people rather than just at night.

Asian tiger mosquitoes can also carry the West Nile virus and other diseases, making them a public health risk. Homeowners who have these mosquitoes around should seek help from professional SC pest control services to prevent the spread of disease.

If you have Asian tiger mosquitoes on your property, don’t hesitate to contact Island Pest Control. Our SC pest control services can help keep you safe from Zika, West Nile virus and other diseases that mosquitoes carry.